Published by Editor B on Friday, 9 January 2015

Let me be amongst the first to congratulate you on the recent coup. That Wasson guy was a fly in the gravy, but now that he’s out of the way, nothing will impede your progress. They say you’re just a temp while Walgreens looks for a new CEO, but I see you hanging around awhile. It’s a global empire now, and you’re sitting on top of the world. Make it last, that’s my advice.

I’ve always admired the ruthless efficiency of your Alliance Boots outfit. I guess that’s why you have your HQ in Switzerland. Lord knows your native Italy isn’t exactly famed for this sort of thing, at least not since that Mussolini guy made the trains run on time. The Swiss do have a flair for order, don’t they? And those tax rates — so reasonable! I know the Walgreens board got a little squeamish at the prospect of relocating to the Alps, but I’m sure under your leadership they’ll come to see the light! Obama can talk about “economic patriotism” but we all know he just wants to hold corporations captive and force them to pay higher taxes to advance his socialist agenda!! It’s getting so I don’t recognize my own country any more. Switzerland is the new America!!!

Enough with the pleasantries. Let me get down to brass tacks. The real reason I’m writing is this silly drive-through policy at Walgreens: no pedestrians or bicycles allowed. Ridiculous, isn’t it? Anti-American, even! A man of your sophisticated European sensibilities will see that in a moment. 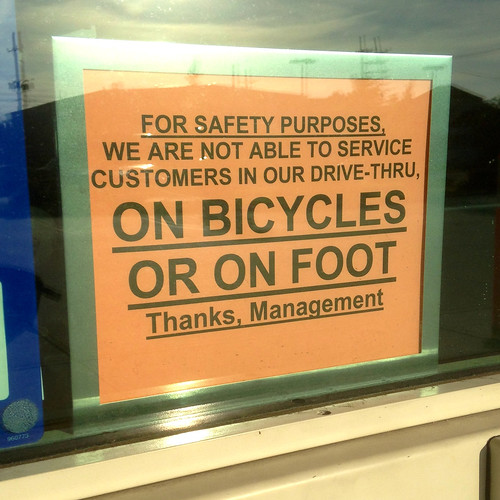 You see, Stefano, I’m not a jet-setter like you. I’m a humble man of the people, just riding my bike around the streets of New Orleans. And let me tell you, these are some mean streets. That’s why I’m so aggravated about the anti-bike policy. I’m out there risking my dome daily, only to roll up at Walgreens and be denied service? On grounds of safety? Sheer madness! Never mind the streets, what about the Walgreens parking lot? You should see how these crazed Americans drive! It’s like the Indy 500 out there.

If we really want to protect the safety of the customer, there is only one sane solution, and that’s to ban automobiles from the premises. I’m sure you see the wisdom of such a scheme, Stef. Cars are dangerous. Besides which, as we all know, my fellow countrymen tend toward the hefty side these days. Americans could use a little more exercise. You’d be doing us all a favor.

So how about it, pal: Any chance you could get this policy reversed?