Published by Editor B on Saturday, 6 January 2018

I just came across an intriguing new article by Cynthia Green on JSTOR Daily. I learned plenty. It also contains the following zinger:

For some reason, we don’t celebrate Twelfth Night anymore.

In response, I can only paraphrase Bugs Bunny:

She don’t know us very well, do she? 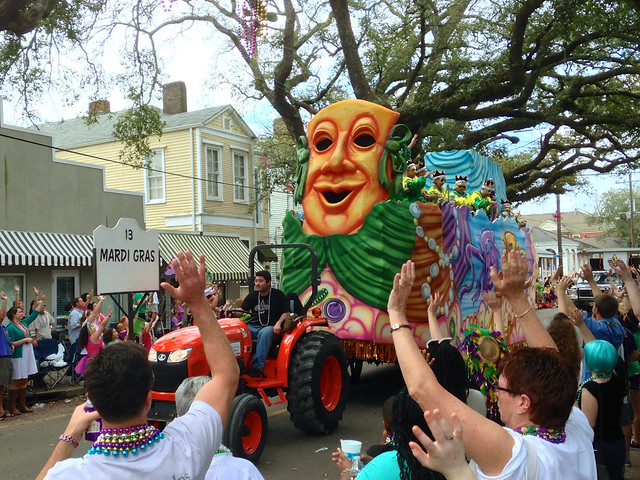 Everybody’s heard of the Twelve Days of Christmas, but few people in 21st-century America know that these are the twelve days after Christmas, ending with Epiphany, also known as Little Christmas or Three Kings Day or Twelfthtide — or Twelfth Night.

In medieval Europe, Christmastide was a wild and woolly time that went on for twelve days, until Epiphany. It combined the Christian feast with elements of the ancient Germanic Yuletide and Roman Saturnalia. Yuletide was a twelve-day feast as well, so Twelfth Night could be considered the last segment of the last remnants of the old pagan solstice celebrations.

During the twelve days of Christmas, everything was turned upside down, authority was mocked, people swapped genders, and so forth. Carnival and Halloween are displacements of these old festivities. When Christmastide was suppressed, they squished out on either side of the calendar.

And indeed, winter festivals have been suppressed for ages. The Puritans famously banned Christmas, both in England and in the American colonies. New Year celebrations were condemned by Christians since the fourth century. As for Twelfth Night, it got so rowdy and boisterous, so secularized and profane, that public observances were banned from the Dutch Church.

If twelve days isn’t enough, consider this: according to some traditions, Christmastide went on for forty days, until Candlemas on February 2nd. Not to muddy the waters, but the first known performance of Shakespeare’s famous play, Twelfth Night, was on Candlemas. Even today, there is a difference of opinion on whether Christmas decorations should come down on Candlemas or Twelfth Night.

But when is it, exactly?

The crucial question is when to start counting. You might think that Christmas Day would be included amongst the Twelve Days of Christmas. That would make the night of January 5th the Twelfth Night, which is indeed the date preferred by many. And then there’s Old Twelfth Night, which is January 17th if you calculate using the Julian calendar, and apparently some people in southwestern England still do. (I prefer to celebrate my birthday then.)

However, I live in New Orleans, and we count differently. We don’t count Christmas. Here Twelfth Night is observed on the evening of January 6th, and it marks the beginning, not the end, of a period of festivity. Meanwhile, my Serbian friend is telling me “Srecne Badnje Vece!” Happy Orthodox Christmas Eve! Could this get any more confusing?

Regardless, today is the first day of Carnival here in New Orleans. The season of king cakes, masked balls, cheap plastic beads and endless parades is upon us. But don’t let surface appearances deceive you. At its heart, Carnival is still about that old inversion, the disruption of the social order that used to center around Christmastide and even more ancient pagan solstice traditions.

Tonight the Phunny Phorty Phellows come out of hiding. The spelling seemed like a modern innovation to me, so I was surprised to learn that the Phellows are actually a revival of an institution going back to 1878. There’s been quite a few changes to their routine over the years. They used to follow Rex on Mardi Gras. Now they ride a streetcar on Twelfth Night.

Last year they were joined by a new krewe, La Société Pas Si Secrète Des Champs-Élysées (The Not So Secret Society of the Elysian Fields), who again this year will pull a similar stunt on the new Rampart streetcar line.

Gambit has a listing of a dozen such events. There can no longer be any doubt about it: the sixth day of the year is regaining lost ground as a special day on our local calendar. (Unlike The Eighth which remains, perhaps deservedly, forgotten.)

January 6th is also Joan of Arc’s (apocryphal) birthday, and so some folks started a new tradition in 2008: the Krewe de Jeanne D’Arc parade. We went for the first time in 2015, and my daughter became very interested in learning more about the life of the Maid of Orleans; we had a blast returning in 2016. My daughter desperately wanted to attend last year, but it was so cold and wet that the parade was postponed. I was fighting a virus. Anyhow, we missed it.

This year marks their tenth anniversary, and I hear the mayor of Orleans, France, and other dignitaries will be there. I wouldn’t miss it for the world.

The Carnival season culminates with Mardi Gras — Fat Tuesday — which always falls on the day before Ash Wednesday, which begins the season of Lent and is forty days before Easter, and as everyone knows Easter falls on the first Sunday after the first full moon following the vernal equinox. Elementary.

What this means is that the beginning of New Orleans Carnival is fixed, but the end floats around. Some years it’s a long season, some years it’s short. But make no mistake, it is a season, not just a holiday. In Rio, Carnival is always exactly the same length, just five days long. For us it’s like an accordion, expanding and contracting over the years. This year we’ve got a shorter season. Mardi Gras falls on February 13th.

How early is that? Mardi Gras can be as early as February 3rd, but I’ve never seen that and probably never will. The earliest Mardi Gras in my lifetime was likely in 2008, when it fell on February 5th. And to think I missed that one because of a sprained ankle and the impending birth of my daughter.

Why, just a couple years ago, in 2016, it fell on the 9th of February, and boy howdy did people complain. There was even talk of fixing the date of Easter so that it would always be on the second Sunday in April. If that happened, Mardi Gras would generally fall in late February.

Of course, the only way to fix the date for Easter would be to ignore the moon entirely. That’s just totally uncool. The moon is awesome. Factoring out the moon is the opposite of awesome. The moon is variable, constantly changing. Some associate the full moon with irrational behavior, from which we derive the word lunacy. All the variability and madness of the Carnival season flows from the silvery light of the moon. Don’t fall prey to the insidious threat of anti-Lunarism!

I still don’t have a costume for Fat Tuesday. My daughter has suggested we at least talk about it every day, starting on New Year’s Day, so we can tell people we’ve been working on our costumes “all year.”