Published by Editor B on Wednesday, 6 January 2016 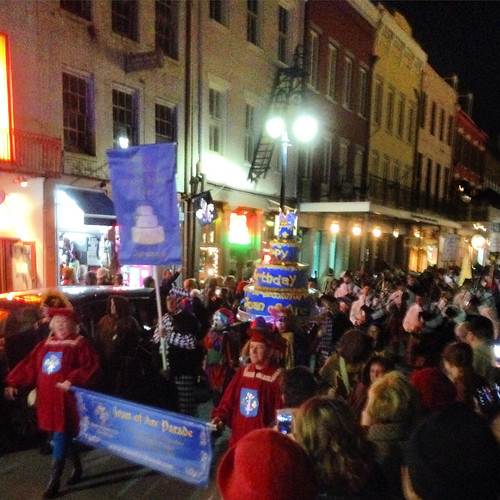 Tonight is Twelfth Night, if you know how to count like a New Orleanian.

Everybody’s heard of the Twelve Days of Christmas, but few people in 21st-century America know that these are the twelve days after Christmas, ending with Epiphany, also known as Little Christmas or Three Kings Day or Twelfthtide.

In merrie olde England, Christmastide was a wild and wooly time, combining elements of the ancient Germanic Yuletide and Roman Saturnalia, when everything was turned upside down, authority was mocked, people swapped genders, and so forth. It went on for twelve days, until Epiphany. I hear in Latin America they go for forty days, until Candlemas on February 2nd, but I digress.

The crucial question is when to start counting. You might think that Christmas Day would be included amongst the Twelve Days of Christmas. That would make the night of January 5th the Twelfth Night, which is indeed the date preferred by many. And then there’s Old Twelfth Night, which is January 17th if you calculate using the Julian calendar, and apparently some people in south-western England still do. I prefer to celebrate my birthday then, but I digress.

However, I live in New Orleans, and we count differently. We don’t count Christmas. Here Twelfth Night is observed on the evening of January 6th, and it marks the beginning, not the end, of a period of festivity.

Yes, today is the first day of Carnival. The season of king cakes, masked balls, cheap plastic beads and endless parades is upon us. My boss has already ordered a king cake for this Friday, the goat cheese and apple one from Cake Cafe. That’s definitely my favorite, so I’m looking forward to it. I just hope I don’t get the baby, as I always seem to do.

Tonight the Phunny Phorty Phellows help to get the party started. The spelling might seem like a modern innovation, but the Phellows are actually a revival of an institution going back to 1878. There’s been quite a few changes to their routine over the years. They used to follow Rex on Mardi Gras. Now they ride a streetcar on Twelfth Night.

January 6th is also Joan of Arc’s (apocryphal) birthday, and some folks capitalized on that, starting a new tradition in 2008: the Krewe de Jeanne D’Arc parade. We went for the first time last year, and my daughter became very interested in learning more about the life of Joan, so we’re looking forward to checking it out again tonight.

The season culminates with Mardi Gras — Fat Tuesday — which always falls on the day before Ash Wednesday, which begins the season of Lent and is forty days before Easter, and as everyone knows Easter falls on the first Sunday after the first full moon following the Vernal Equinox. Elementary.

What this means is that the beginning of Carnival is fixed, but the end floats around. Some years it’s a long season, some years it’s short. It’s like an accordion, expanding and contracting over the years. This year we’ve got a very short season. Mardi Gras fall on February 9th.

How early is that? Why, it won’t be this early again till 2027. It can be as early as February 3rd, but I’ve never seen that and probably never will. The earliest Mardi Gras in my lifetime was likely in 2008, when it fell on February 5th. And to think I missed that one because of a sprained ankle and the impending birth of my daughter, but I digress.

The latest Mardi Gras I’ve ever seen was in 2011, but I’m certainly hoping to be around in 2038 when Mardi Gras will fall on March 9, the last possible day. Again, I digress. I’m very digressive these days.

My point is that this year, it’s a short season, and the response is predictable. We hear people complaining that it’s all going by too quickly. Don’t fall into this trap! The variability of Mardi Gras and the Carnival season is a wonderful thing. Embrace it. Celebrate, don’t denigrate. Consider the implications of a convenient, modern, fixed date. The only way this would work is if Easter became a fixed feast rather than a moveable feast, which would mean disregarding the moon entirely. I’m sure some people would like that very much, but the very idea makes me retch. Don’t fall prey to this insidious anti-Lunarism. When a fellow paradegoer complains about the short Carnival season, haul off and punch that person right in the face. Strike a blow for the moon!

I still don’t have a costume, but it’s time to start thinking about one.