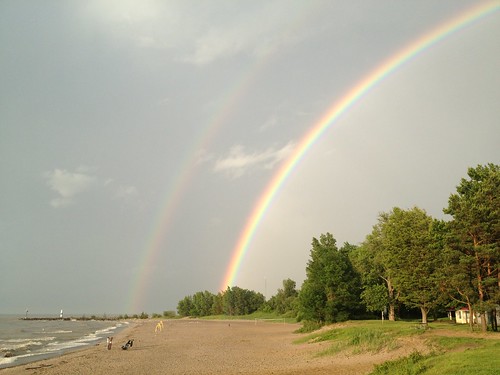 On the 28th of March, 2004, I started this blog with a post about sweetgum buds. Later that day, I attended a meeting of the Greater New Orleans Green Party, where the group endorsed a statement I’d written on the subject of marriage equality.

Everybody should have the right to get married. The sex of the partners should have no more bearing on their right to marriage than their race or religion.

You can read the whole thing; it’s no work of genius but I’m quite proud of it.

At that time, I thought marriage equality was a great issue for people of conscience to “organize around.” That is, I thought the issue could serve to get people with diverse and divergent concerns working together, starting to see the connections between many different social causes — perhaps garnering support for Green candidates in the process.

Because, after all, marriage is a positive thing. Wedding celebrations can be beautiful and joyous. Who wouldn’t get excited about that?

A couple months later, I posted the following.

Gay people are getting married in Massachusetts today, and this straight, married man couldn’t be happier. I love weddings. In fact, the stories in the news today brought a tear to my eye. I can’t help but feel overwhelmingly positive about this development. Maybe I’m just starved for good news. But this feels like a historic day. Fifty years from now, I bet we’ll all be looking back and remembering.

But when November 2004 rolled around, I was alarmed and disappointed to see the issue being used to ends which were exactly the opposite of what I’d dreamed. Instead of a rallying point for liberty and unity, voters turned out in droves to deny equal rights to their fellow citizens — giving electoral support to conservative candidates.

Demoralized and dejected, I second-guessed myself at that point. I figured I was just profoundly out-of-touch with the American people. Fortunately, many truly committed activists didn’t give up so easily. They kept working away, on many fronts. Public opinion has shifted dramatically in that time. I guess I need to triple-guess myself. There have been other victories and setbacks along the way, but it’s hard to imagine anything bigger than last week’s ruling.

In retrospect, it seems clear that it will be the 26th of June, and not 17th of May, that will be remembered as we look back at this time. Not only do we have Obergefell v. Hodges to commemorate, but the 26th of June is also the date of the decisions on two other historic related cases: United States v. Windsor (2013) and Lawrence v. Texas (2003).

And let’s not forget Loving Day on the 12th of June, in honor of the historic ruling on Loving v. Virginia, which made interracial marriage legal in 1967.

Happily, it seems that June is increasing its currency as the month of matrimony. As I note in Flowers to Flame:

For centuries, June has been far and away the most popular month for weddings. The very name of the month derives from the Roman goddess Juno, queen of the gods but also goddess of marriage. This is the time to celebrate union, and not just the young, passionate, lusty desires of May, but also the more mature, stable, lasting commitment, the intimate, deep commingling of self and other.

I’ve read that the achievement of marriage equality in our country may lead to a renewed appreciation for the institution of marriage, especially amongst left-leaning types who have sadly ceded that ground to conservatives in recent decades.

I hope so. Xy and I will mark 22 years of marriage this year, and I can testify that despite many challenges along the way, it has been on balance a very healthy thing for me, and for Xy too I think. Marriage isn’t automatically awesome, but it can be, and I am glad that more people will be able to participate.

Footnote: Can I indulge in a little quadruple-guessing? I do have some misgivings, of course; it’s my nature to consider the angles. When Xy and I got married, I asked, “Who is the ultimate arbiter of human relations?” (It was in our wedding program!) Is it the state or the community? While I strongly endorse the right of consenting individuals to get married, I’m skeptical about why the state has to get involved. Thus I find myself strangely sympathetic to the arguments of conservative Libertarian Party types. I see that some states here in the Deep South are suddenly eager to get out of the marriage business entirely. That’s interesting, and though I deplore the motive in some ways, I’m curious to see where it will lead.