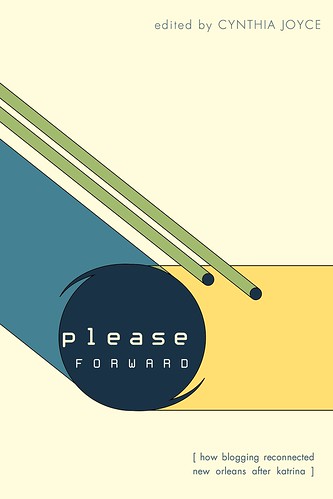 I know I shouldn’t be excited about something so grim but nevertheless I am happy to announce that Please Forward will soon be available in bookstores (officially on August 15) and is now available for pre-order at all the usual places, including my favorite bookstore.

This anthology collects online writings that erupted in the aftermath of the flooding of New Orleans in 2005. As such, it’s a topic that’s near and dear to my heart, upon which I have expounded at some length.

I have a special enthusiasm for this particular tome, because I’m in it. Not once but three times. Or so I’ve been told. I haven’t actually seen the thing yet.

Faithful readers of this blog will have already read my entries, since they were posted here nearly ten years ago. I won’t tell you which ones were selected, so as to maintain at least a modicum of suspense. You’ll have to lay hands on the book to find out.

You’ve given up on us because we’re poor, black, Southern. We’re clowns, partying all day, drinking all night…. We’re not going to go away. We are going to keep staggering along, demanding attention, pulling on your sleeve like some scabby beggar who knows you from another life….  And if we go down, we’re going to take you down with us.

Given the tragic genesis of these utterances, I know my current exuberance is wrong. I can’t help it, though.

Also, there’s a book launch party planned at Room 220 on Tuesday, August 18, at 7PM. Hope to see you there. In the meantime, you can keep track on Facebook.