There was a little frost outside this morning, but our cold snap seems to be coming to an end. The morning bike ride was chilly but not bone-chilling. It looks as though we won’t see freezing temperatures for the rest of the week. Hopefully the rest of the season! Personally I’d be happy if I never experienced anything below 50ºF for the rest of my life. That’s plenty cold enough for me.

Xy left some overripe pomegranate on the deck for the birds to eat. I was taken with the image of the red fruit covered with white frost. 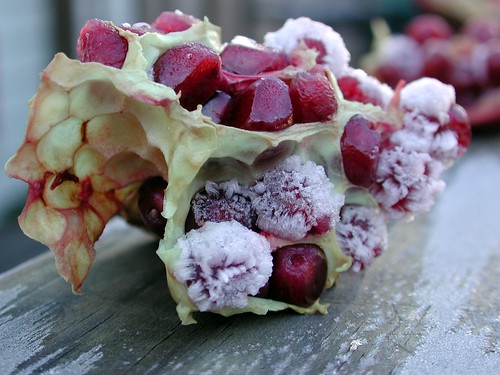 As Casey pointed out, this is “chock full o’ meaning re: the Persephone myth!” Which is oh-so-true. Can’t believe I didn’t recognize that myself.

Speaking of the goddess, we were exploring the back yard yesterday and made a fun discovery. Some water had pooled on a tarp and remained frozen in a large sheet. That allowed me to take this photo, which I call “Toddler Encased in a Block of Ice!” Alas it seems that a lot of our plants have probably not survived. I brought in some of the smaller potted plants, but we did not cover any of the bushes and trees small trees, and it’s looking like we should have. The house came so nicely landscaped too. I guess we just haven’t been there long enough to be thoroughly familiar with the grounds and their upkeep. We also had a fish die; not sure if that was related to the cold or not. The flora and fauna generally falls under Xy’s purview, and she’d been pretty much out of commission ever since our trip out west. Hopefully she will feel better soon.