Published by Editor B on Thursday, 12 January 2017

As I draw on to the end of my fifth decade, I’m feeling reflective. Indulge me in a little reminiscence, and by all means come to my birthday party. What follows is part four in a series; read about my first, second, and third decades on Mid-City Messenger.

My fourth decade kicked off with a knock-down, drag-out, protracted dispute between my father and me. We worked through many longstanding resentments and misunderstandings in counseling sessions that went on for the better part of a year. As part of the deal, we both agreed to swear off drugs, including alcohol and tobacco but not caffeine or cough syrup, thankfully.

And so it was that I found myself stone cold sober at my 30th birthday party.

Somehow I convinced my father to join me in publishing an online journal over the course of 1997. We posted our intimate thoughts on drugs, alcohol, and our relationship. It was, in fact, a blog — though that word wasn’t coined until a year or two later. It’s still online for anyone who’s curious.

After much effort, my father and I managed to salvage our relationship. It was a lot of work, but it was worth it. We’re still friends.

My grandmother passed away that summer, the last of my grandparents.

In the fall, Christy got a job teaching in Indianapolis, and we moved out of the garage. I got wind of a new graduate program at Indiana University, through the Department of Telecommunications: the Masters in Immersive Mediated Environments, or MIME for short. My work with ROX got me in the door.

MIME offered a wide-open approach to new media. For my master’s project I combined forces with my wife to launch The All New Christy Paxson Show, a transmedia spectacular which included a series of web animations detailing “The Life of Christy.” It’s still online for anyone who’s curious. 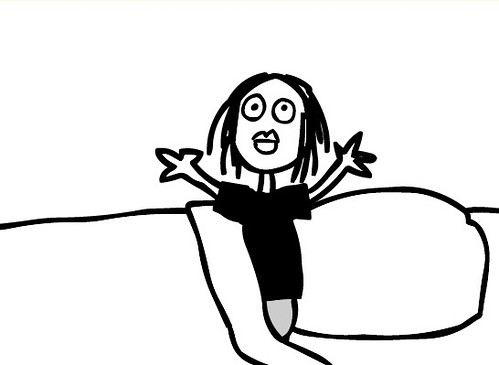 Around this time I was in conversations with some folks at Free Speech TV about the idea of launching a website which would allow users to upload their own videos. Basically, our idea was YouTube — but we never launched.

Things were pretty rough for Christy in Indianapolis. One of her students died in a house fire. We sent out a card that December with the grim inscription, “Unhappy Holidays.”

Before I knew it, graduation loomed. I asked Christy if I should look for work globally. We both loved Bloomington, so this was a tough call, but in the end I applied for jobs all over the country.

I scored exactly one interview, and it changed my life. In February of 1999, I flew down to New Orleans for an interview at a certain HBCU. I had purchased a pair of shoes for the occasion, only they weren’t brand new. They were from the Salvation Army. Much to my chagrin, they began to disintegrate during the day of interviews and meetings. Little chunks of sole were crumbling off and littering the carpet. I was probably hired because they felt sorry for me.

We moved down here in May, and nothing’s been the same for us since.

To me, the experience of being in NOLA is inextricably intertwined with the experience of working at that HBCU that hired me, and of riding my bike to campus every day. All three have been very good for me. I immediately felt “at home” even though I was an outsider.

Things haven’t been so good for my long-suffering wife. She thought the Indianapolis public schools were rough, but here in New Orleans she discovered a whole ‘nother level. I was stunned when she came home from a meeting where teachers were advised to use the Bible to solve their discipline issues. Make sure you got a big thick edition, so when you hit your students they can really feel it!

The world population hit six billion in late 1999. Fears of a “Y2K bug” apocalypse proved unfounded. We moved from our pricey apartment in the Warehouse District to a cheaper rental uptown. I left some frozen chicken in the trunk one day, but that’s another story. I started producing an experimental TV series called no.rox.

The Nader campaign was ramping up and I got involved with a group of people trying to form a Green Party of Louisiana. We eventually held our founding convention in 2002 and officially qualified with the Secretary of State in August of 2005, just weeks before you-know-what.

But I’m getting ahead of myself.

Technically the 21st century began in 2001. I made a return trip to Scandinavia, for a conference in Finland. Terrorists flew planes like bombs into buildings that September, in a ploy to provoke war between Islam and the West. ROX went back into production, albeit at a much slower pace.

We bought a house in Mid-City. I’d feared my bankruptcy would be an obstacle, but it wasn’t. The financial system was more than happy to welcome me back to a lifetime of debt.

Blogs became a thing. My employer implemented a new electronic timekeeping system, prompting me to start my first blog (as such), Pride Before Kronos. It’s still online for anyone who’s curious. I’ve been told it played a role in changing our policy. The experience was so powerful it motivated me to start my personal blog, b.rox, in the spring of 2004.

Service was restored to the Canal Streetcar line after a forty-year interruption, and the first car rolled just two blocks from our new house. There were also a number of street murders nearby that year. In once case we knew the accused shooter, who later turned himself in.

In May of 2005, I hiked the length of the Lafitte Corridor with a couple friends. I was stunned by the potential of this abandoned rail-line, and I started researching how to spearhead the a project of turning it into a trail.

We declared that summer to be “The Summer of Christy” and we celebrated all summer long. As we vacationed in the Ozarks, we tackled the question of reproducing. We decided to give it a whirl. Christy went off the pill, and we even planned our first official go at conception. It was to be at our friends’ wedding under the Brooklyn Bridge on Labor Day weekend. Well, not at the wedding ceremony itself, of course.

But we never made that trip.

Katrina and what came after

I used to think of the year I lived in Sweden as the worst in my life, wrought as it was with teen angst and personal conflicts and the pain of apostasy, not to mention that cold dark winter near the arctic circle. However, the next sixteen months were worse — from when Katrina made landfall on the Gulf Coast, right up to the end of my fourth decade on this planet.

We ended up spending almost three months in Indiana, and I’m ever grateful to the community of Bloomington for their hospitality. I made a couple trips back to New Orleans during that time, sneaking into a closed city on the first trip, gutting the lower floor of our house on the second. When Christy joined me for our final return, tornadoes and snow flurries chased us away from the Midwest — as if to say, get back down there to New Orleans.

We crashed for a while on a friend’s couch in the Irish Channel. But what I remember most is when we moved back into our house in Mid-City. We were the only people living in the immediate area. In that dark December, the only lights for blocks around were the oil lamps we used to play Scrabble.

In January of 2006, on my 39th birthday, all the universities re-opened. For my money, this was the single most hopeful moment in the recovery of the city.

It was a long hard slog. Living in the flood zone, surrounded by devastation, we lost all touch with what might be considered normality. I drank heavily. And participated in endless planning processes.

There were bright spots along the way, and I clung to each one. Seventeen people showed up for something I billed as the “second annual hike” of the Lafitte Corridor, and the group known as Friends of Lafitte Greenway was born that day.

Picking up our discussions before the storm, Christy and I decided to start trying. She got pregnant almost immediately but then suffered a painful miscarriage. That was surely one of the worst days.

Though it all, I kept at my blog, writing as if my life depended on it. Maybe it did. Before the storm I read people from around the world; now I wanted only to read locals, and I discovered I was not alone. A community of bloggers emerged. On the first anniversary of Katrina there was a conference put on by the local blogging community, Rising Tide, the first of ten annual meetings to consider the future of New Orleans.

And then the worst thing ever happened, a tragedy so cruel I can still hardly wrap my head around it. On the fourth day of 2007, Helen Hill was murdered in her own home. A talented artist and the sweetest person you could ever hope to meet, Helen was also a personal friend. The murderer was never publicly identified, and no one was ever arrested for this heinous crime.

I grieved for Helen deeply, and I still do, but her untimely passing affected me in another, very unexpected way. The murder of Dinerral Shavers combined with Helen Hill to produce an unprecedented level of community outrage, and the largest protest in the history of the city was organized. I found myself invited to join a dozen speakers at a massive rally at City Hall.

This experience changed me forever, but that would only become evident in my next decade. As my 40th birthday approached, I found myself in a distinctly non-celebratory mood, questioning why I’d moved back to New Orleans.

Stay tuned for the surprising twists and turns of my fifth decade.