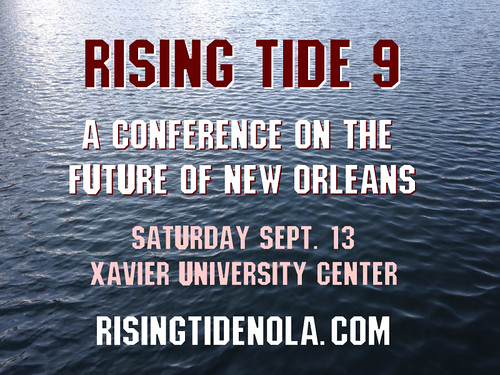 It’s time once again for Rising Tide. This will be the ninth iteration of this “conference on the future of New Orleans” which was launched by a bunch of local bloggers and concerned citizens on the first anniversary of Katrina.

I think what I like most about this event is its grassroots nature. Even though it is hosted at Xavier University of Louisiana (thanks to the sponsorship of the Center for the Advancement of Teaching) the event itself is entirely organized by volunteers. All the work that goes into it is done for sheer passion. The consistent quality of the event itself is a testimony to the power of that approach.

Of course, that means there is no big advertising budget. The only way most people learn of the conference is through that modern equivalent to word-of-mouth: social media.

So please take a moment and register for the conference, and then use Facebook or Twitter or email to help spread the word.

What’s that? You remain unconvinced? It’s gonna take more persuasion to get you to part with ten bucks? Fine, check the conference schedule. Look at that keynote on school reform by Andre Perry. Surely you’re curious as to why the former CEO of the Capital One-UNO Charter Network is saying that charter schools “aren’t the proper tools to deal with the root problems of New Orleans education.”

If that’s not enough to get you in the door, check out any of the other panels. I’d like especially to draw your attention to the final one, “Religion in Post-Katrina New Orleans,” which I am helping to organize in cooperation with Jimmy Huck. 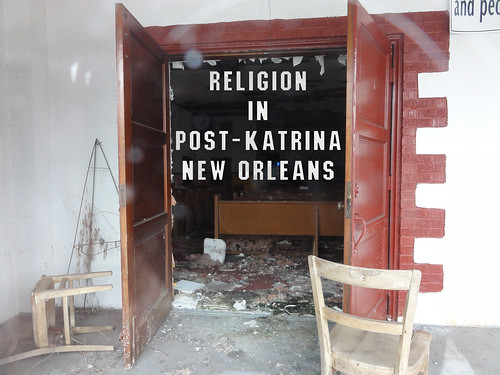 Last but not least, there’s the added enticement of a delicious lunch. Please register now.