Published by Editor B on Wednesday, 2 April 2014

Five years ago I wrote an account of my typical day. A lot has changed since then, so I thought I’d revisit the topic. Here’s what my typical day looks like now.

We wake up to the sound of music, a long slow fade-in that starts at 5:45 AM. Sometimes I set my phone alarm even earlier so I can jog, but if not I tend to lie in bed zoning in and out of consciousness for about half an hour, listening to the morning mix. If I recall any dreams I write them down, though I don’t seem to remember many dreams these days. Meanwhile Xy has gotten up and gone downstairs. She’s usually still drinking her morning coffee and watching The Daily Show or The Colbert Report on her laptop by the time I get down there. I’d rather not see (or hear) any video in the morning, but you gotta pick your battles, people.

I’m responsible for breakfast — and lunch. I slice some bread for sandwiches, and cook up a mess of scrambled eggs with baby kale or spinach. Once Xy gets her hair in rollers, she runs back upstairs to get the girl. The three of us eat breakfast together, listening to music and talking about whatever’s in the newspaper and our plans for the day.

Eventually we’re all dressed and ready. Xy almost always departs first; the girl and I get on the bike shortly thereafter, unless it’s raining, in which case she gets a ride with a neighboring schoolmate.

As we ride through the streets of Mid-City, at some point, the girl almost always asks me the same question: “So, what do you want to play?” We might pretend to be almost anything, usually fantastical imaginary creatures of some sort.

We always greet “our” tree as we pass it along Bayou St. John. As we pass the post office, the girl often pretends to retrieve a letter, which invariably proves to be from the principal of her school, inviting her to attend a fantastical imaginary academy of some sort. It might be a school for animals of every variety, for example. Lately there’s been a big emphasis on potion classes.

Once we get to school I brush out her hair, which has gotten tangled on the ride, and install her headband. We say farewell to each other with a hug and a kiss. If the weather permits, there’s a big all-school morning meeting outside. If my schedule permits, I stick around for this. I listen to the students sing their weekly song together, as well as other announcements and awards. When they get ready to pledge the flag I take that as my cue to depart.

As I ride along the bayou toward campus, often something will catch my eye. I’ll take a photo and share it to various social networks. 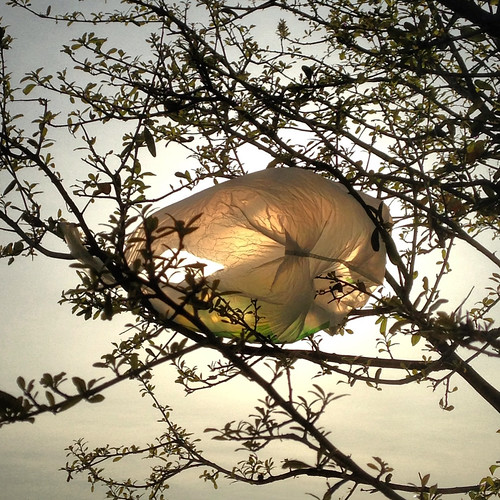 I make a point to stop by “our” tree as I pass it again. This is where the girl got her name back in 2008, the tree we blessed last November. I’ve been stopping here for a morning reflection for years now, as permitted by my varying routine. Sometimes I’ll do a formal meditation, but often I’ll just commune with the tree, noting its presence, noting any changes, maybe giving it a squeeze. Yes, I’m one of those “tree huggers” you’ve heard about. If there’s trash around, I pick it up.

At last I make it to campus. When I walk in the door, Olivia always asks me, “How are you?” It sounds ridiculous, but I have to remind myself that this is something humans call “small talk” and that I am not required to do a deep soul-searching analysis in response.

I have a couple floor pillows in my office which I use for a brief meditation. I’ve got iTunes rigged to play the stream from home after ten minutes.

If I’m drinking coffee, I have a cup. Generally I drink coffee only during the cold half of the year. I never make coffee these days; Olivia handles that. If I’m not drinking coffee, I’ll make myself a cup of tea.

This year I’m spending a few minutes each morning recalling and reviewing what I’ve done on this particular day in the past. I find it to be an interesting exercise.

I spend a fair amount of time sitting in front of a computer, staring at this giant monitor. Often I’ll don headphones and listen to the stream from home. Yes, it’s the same stream that started my day, but it’s hardly the same music. The program is constantly shifting. By the time I’ve left the house it’s strictly ambient. Around 10 AM it switches over to an eclectic mix. Around noon some longer pieces come on, followed by a series of programs which might be called “Anything but Pop/Rock!”, “World Folk Tribe,” and “Pop Exploration.” I’ve got this all automated now, through a combination of iTunes smart playlists, wifi, Koingo Alarm Clock Pro, and some gnarly AppleScript.

OK, but what about work itself? I’m still working the same job, in the same office, as I was five years ago, or ten years ago for that matter. I’ve been at this almost 15 years now, but a lot has changed. Over the last five years I’ve come to embrace the idea of faculty development in the broadest possible sense, rather than the more narrow approach which marked my first ten years on the job. I still do a lot of technology-related stuff, but these days I also pay a lot of attention to ideas like contemplative pedagogy and integrative learning. I generally advocate for a holistic or integral approach to faculty development.

My time is mostly spent in reading, writing, meeting, talking, listening, researching, learning, and preparing for workshops or presentations. I’m not doing nearly as much production work these days as I used to once upon a time. I’d like to get back to that. Some parts of my job are a little tedious, but the drudgery tends to open up the most interesting parts of my work. For example, lately I’ve been wrapping up the final report on a recent grant and working on an application for a new grant. These documents aren’t exactly gripping, but the grants have enabled faculty here to explore contemplative practices in relation to teaching and learning. Thus they’ve enabled me to focus on the same.

I still have my same lunch — a carrot, a sandwich, an apple — the main difference being that now my sandwiches are on homemade bread. Also, for the better part of the past year I ramped up to two lunches daily in an effort to gain weight. That effort was successful, and I’m back to one lunch.

After work I might hit the gym. That’s another change. Five years ago I didn’t have a membership.

Xy usually picks the girl up on her way home from school. If it’s a nice day the girl might take a bike ride around the block, or maybe just a walk. Xy will usually have a beer or two, but I’m off the booze these days as a rule. We might visit with some neighbors. One of us will prepare dinner. These days we are generally trying to embrace a pescatarian diet. Sometimes “Uncle” James will join us. We say grace to Mother Earth together, and as we eat we talk about our day.

After dinner the girl will have a bath. I’m generally the one who tucks her in with a bedtime story. Somewhere in there I’ll usually squeeze in a bath myself. Xy and I might watch a DVD from Netflix. Xy often has homework, but she is not quite so busy these days as she used to be.

During this calendar year I’m making an effort to write in my journal every night without fail. Ninety-one days so far and counting.

What’s missing from this account is the affective dimension. I should add that my days are full of beauty and meaning. For this, I am grateful.