Published by Editor B on Wednesday, 7 September 2011

Yes, a month after the fact I’m still recovering from Tales of the Cocktail. Here’s my fourth and final installment.

I learned some fascinating stuff from Jeff “Beachbum” Berry. For example, I didn’t know that the legendary founder of the Tiki Craze, Don the Beachcomber, came from New Orleans. (Wikipedia says otherwise but I have it on good authority.) It was also a treat to see Ian Burrell do his ninja shake. 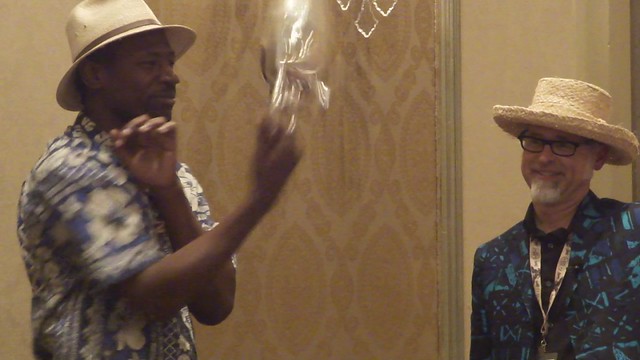 I also learned the true origin of the Mai Tai cocktail. So that was all highly edifying. No complaints there.

But after this session I had to hurry over to another on the Gin & Tonic. Does the idea of Tiki drinks followed by G&Ts sound appetizing to you? I have no one but myself to blame, of course, as I made my own schedule.

As long as I’m bellyaching, look at this Powerpoint slide. It’s so bad the presenter even made fun of it. I’m tactfully omitting her name to prevent further embarrassment. But at least I got to see a bunch of rare and unusual products which I most ardently desire to possess. If you want to get me a special gift (and why wouldn’t you?) anything pictured here will do. Next up (Saturday morning actually) I was shocked and awed by a seminar on vinegar. This paired nicely with Wayne Curtis‘ seminar on colonial American drinks, because we kicked things off with a Haymaker’s Punch, also known as switchel, a beverage made with vinegar and sweetened water which “originated in the Caribbean, and had become a popular summer drink in the American Colonies in the late 17th century,” according to Wikipedia. I gather switchel was a non-alcoholic drink popular during the temperance movement, but I’m pretty sure they put some rum in this version. Presenter Kelley Slagle called it “the original sportsman’s drink.” All I could say was, “Wow.” I really liked it.

Kelly came to vinegar as a bartender. One of the other panelists, Karl duHoffmann, came at it from a medicinal angle. I’m probably recalling incorrectly but I think his family had connections to homeopathy back in the day. (I found this doubly intriguing because I was reading The End of Mr. Y at time, a science fiction novel in which homeopathic medicine plays a central role. I cannot recommend the book, alas.) Karl cracked me up when he compared volatile acidity in wine to “a woman of great beauty with flaws but no faults.” Truly, it was astonishing the level of passion these folks brought to the subject of vinegar. They even presented original research, trying to correlate acidity, pH levels and subjective taste. Their results were inconclusive, but I love that they tried. Then, at last, it was time for “The Journey of Artemesia Absinthium.” Attentive readers may recall that, though I conducted a pre-interview with the presenters, I was not at all sure I’d be able to wangle my way into the seminar itself.

But wangle I did, and a good thing too. This session was my second favorite of the whole conference. We went all the way back to 1552 BC, which is the date of some written references to wormwood, on papyrus no less, and we worked our way forward from there. I’m probably dense, but I never realized why we call it wormwood: It’s a traditional cure for intestinal parasitical worms. We learned why vermouth has a Germanic name despite its Italian origin. We learned how absinthe was invented and why it was really banned. Fascinating stuff, brought to life by Jared Brown and Anistatia Miller. (By the way, I sure did notice a lot of seersucker at Tales.)

I couldn’t get a good photo of Anistatia. She was far too animated.

I was also suitably impressed by Giuseppe Gallo, who uttered the following quotable: “Our recommendation is to drink responsibly — but drink everything.”

And there you have it. There were no Sunday seminars this year, so I was effectively finished with Tales on Saturday. I’m sure they curtailed the Sunday activities for any variety of sensible reasons, but a part of me already misses the hangover jokes requisite to an early Sunday morning cocktail seminar.

On a more personal note, I found myself fielding one question from most of the people I met at Tales thus year: “What’s your blog about?” My typical reply was: “It’s all about me!” I’ve been a unabashed and unapologetic self-centered egotistical narcissist for so long that such an answer comes very naturally. But at the same time it’s got me thinking that it may be time to make some changes. More on that later.

What the hell, here’s a “parting shot.”