Tuesday was the Summer Solstice. I got up super early (4AM by my body clock, which was still in the Central Time Zone) and headed down to the beach.

It was still pretty dark, but even at that early hour the eastern sky held a faint glow which grew stronger slowly, slowly, as I watched and waited. There was also plenty of light from a gorgeous half-moon directly overhead.

After a while the horizon was positively rosy. There seemed to be a few clouds there. I figured they might obscure the solar disk, and this gentle rosy glow would be the full extent of the drama.

I was wrong about that. Soon I spotted a planet. I’m not set up for celestial photography, but you can see the planet in this shot if you look really close. So I thought that was it. Not that I was disappointed. It was quite beautiful. I prepared to head back to our room, when a woman passed by walking her dog. There weren’t many people out on the beach at that time, and I suppose there’s a certain presumption of familiarity, if not fraternity, with other early risers. Anyway, she said to me, in a tone that suggested we were old friends, “Just fifteen more minutes.”

Blow me down. I thought I’d been watching the sunrise. I knew the precise time of dawn, as I’d checked on the net, but I didn’t have a timepiece on me.

So I stuck around a little longer, and a good thing too. When the sun finally did pop up over the horizon, it was glorious. Majestic. Awe-inspiring. Definitely worth getting up for.

Every year I learn a little bit more about astronomy and other aspects of these celestial events. Most of us know (if we’re aware of it at all) that the summer solstice is the longest day of the year. I always assumed that meant the earliest dawn and the latest sunset of the year as well. Makes sense, right? Stands to reason. But in fact the earliest dawn came about a week before the solstice, and the latest sunset about a week after. Weird, huh? I also learned that idea I have had in my head of the earth tilting back and forth on its axis is not correct. The axis is indeed tilted with respect to the plane of earth’s orbit around the sun, but it stays tilted in the same direction all year round. It’s just that as it revolves around the sun, that tilt means that one hemisphere and then the other gets more direct solar rays. It’s easy to find illustrations of this concept all over the web.

I really wanted to do something special to celebrate the solstice. I got a book on the topic, The Summer Solstice by Ellen Jackson. This book provides a kid-friendly explication of the summer solstice from diverse world traditions and the scientific perspective as well. Includes a story from Hawaii and hands-on activities. If there’s another book like this I haven’t found it yet. (Actually this is one in a series of four books by Ellen Jackson on the solstices and equinoxes, but I don’t know of any other book or series for kids that addresses the topic from a global perspective.) I read this to Persephone a couple times, and my father-in-law did too. She understands the basic concept, I think, and certainly understood this was a special day. She was especially excited to make a wreath in the Bohemian style, which I thought would be especially appropriate given her heritage, but on the day before our departure from New Orleans I realized I should have been drying out weeds, reeds and grasses a week or two ahead of time. I felt bad about having screwed that up. Having a bonfire wasn’t really an option for us. Another cool ritual I came across somewhere was the idea of launching candles on paper boats, but I don’t think that would work too well on the Atlantic Ocean. Maybe next year, if we’re in New Orleans, we could do that on the bayou.

So our celebrations in Vero were less ambitious. Persephone and I spent the latter part of the morning building a big sand sculpture. It wasn’t particularly artistic — just a big circular trench surrounded by towers. It was a solar symbol, at least in my mind. I didn’t take my camera down to the beach while we played in the sand, so I don’t have a photo of that captures the full glory of it, but I did pass by later and take a picture after the water had washed most of it away. I actually started work on this project before the sun came up. Later in the day we made the obligatory visit to McKee Botanical Garden. This place was established by the same eccentric Hoosier who created the Driftwood, the infamous Waldo Sexton. More about him later. Soon we were standing again in the Hall of Giants, marveling at the world’s largest mahogany table and other wonders. 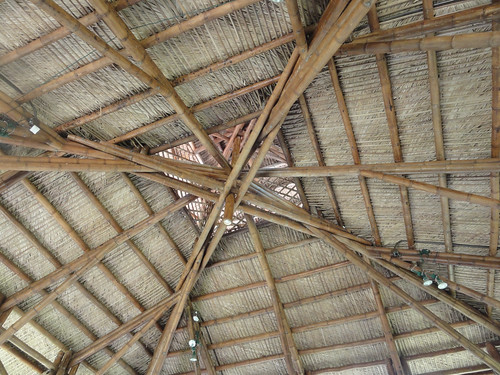 Unfortunately it was blazing hot. In fact our whole trip seems to have been in the middle of a heat wave. When we visited this garden four years ago, the high was 86ºF. This day the high was 93ºF but we were melting like it was over a hundred. I’m sure with the heat index it was.

Fortunately things were much more pleasant by the time we got ready for our evening meal. We decided to dine al fresco on one of the tables by the ocean. We used one of the gas grills to cook our food. This was also a nice place to meet some of our fellow guests. I discovered a lot of people were from inland Florida. Many of them had been coming to the Driftwood for years. We’d stopped at a BBQ restaurant on the way home and picked up a couple pints of sauce.

Here’s a picture of grandma and granddaughter waiting for their dinner. I love their expressions in this photo. I also love this funky triangular table. The chicken and roasted asparagus were delicious.

Afterward we went for a walk on the beach. A great end to the longest day of the year.