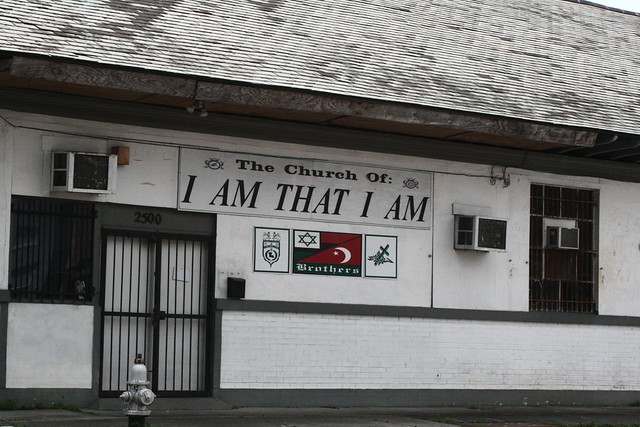 It’s been a while, but I’m still aiming to catalog all the two-letter words in the English language. That brings us to am, which is a simple and common word. I’m sure you can use it in a sentence. But can you define it? According to the Wiktionary, it’s the “first-person singular simple present indicative form of be.” (I’ll deal with be later.) It’s a state-of-being verb, famously deployed in statements such as “I am that I am” and “I think therefore I am.” But both of those are translations from other languages: אהיה אשר אהיה (Ehyeh asher ehyeh) and Je pense, donc je suis or Cogito ergo sum. I’m trying to think of a famous am in original English but I’m drawing a blank. “I am a jelly donut,” perhaps? No, that’s Ich bin ein Berliner. Oh well.

Four words can be formed by adding a letter at the end of am:

Twelve words can be formed by adding a letter to the beginning of am:

By the by, the two photos featured above are of a single church in New Orleans. The pictures were taken a year apart by two different photographers, and I guess the building was renovated in the interim. Neither of the photographers appears to live in New Orleans, and I doubt they’ve seen each others’ photos. Credits below.