Published by Editor B on Sunday, 12 September 2010

Maybe it was the caffeine. And the lack of food. Or the physical exertion late in the day. Or just my old overactive mind.

In any case, I didn’t sleep at all last night. I tried. Repeatedly. But I just couldn’t do it.

I don’t think I’ve pulled an all-nighter since that freaky Jazz Fest weekend five years ago.

I’ve been off caffeine most of the summer, except for an occasional indulgence. At book club Saturday morning, I had two and a half tiny cups of extraordinarily strong coffee. But since it was before noon, I thought I was safe.

As for the physical exertion, that takes a bit more explaining. I’ll recount the essential facts without delving into the numerous bizarre details. As I mentioned a couple months ago, we need some work done on our driveway. A parent of one of Xy’s students offered to do the work — for free. This is amazing enough I hope to write more about it later. He and his crew got started yesterday, busting up the old concrete the old-fashioned way. 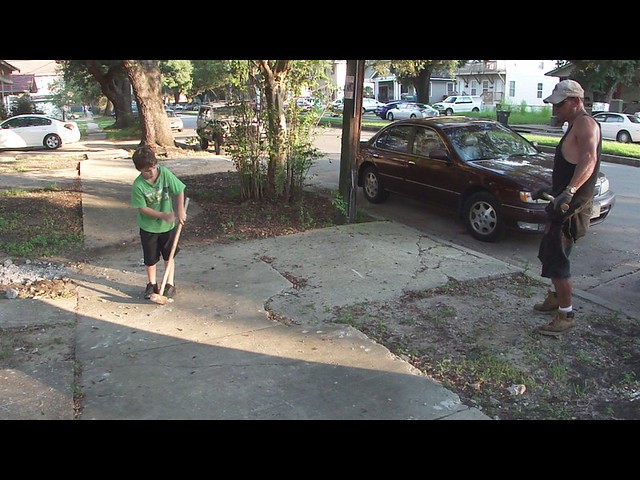 I felt obliged to go out and swing the sledgehammer with them, even though I’m not really in shape for that kind of work. We kept going until well after dark. I learned that sledgehammers make sparks when they strike concrete.

Between the caffeine and the exertion, I didn’t really seem to have much appetite, and so I didn’t eat much. I’ve found that having a snack before bedtime helps me get to sleep, so I planned to have a bowl of cereal, but we were out of soymilk, so I skipped it.

I’ve had many “sleepless” nights before, but that’s usually a figure of speech. Usually I drift off around four or so, or just after dawn. In this case, however, I really don’t think I slept at all. I got up several times during the night, to read, to eat a snack, to surf the web. I worked on my interface to the library of Babel, available (for now) at borges.rox. At 4:15 AM I left the house in my robe to investigate a car alarm. Each time I went back to bed and tried to go to sleep. But it just never took.

I have suffered from intermittent bouts of insomnia for as long as I can remember, but I do believe this was the worst ever. Certainly the worst since my daughter was born.