Hey, my name crops up in a new article on CityLab, the noted urban news site from The Atlantic. It’s about the Lafitte Greenway.

The corridor carved out by the greenway is almost as old as the city itself. Cutting through the center of the city, it connects Bayou St. John and the Mississippi River. It has always been used for transport, whether via portage by the first settlers to the region, via canal in the 18th century, or via railroad in the 19th and 20th centuries. By the 1970s, rail transport in the city shifted to other lines; the ties were pulled out, and soon, this strip of land became a vacant, overgrown field. Then a guy named Bart Everson came along.

One year after Katrina, catalyzed by a desire to revive a destroyed city, Everson and friends bushwhacked their way through the path. That homegrown effort coincided with a sudden surge of federal funding aimed at rebuilding New Orleans, and—importantly—making it smarter, greener, and more sustainable. The city got on board with the idea of turning the old railway into a trailway, and even repurchased some of the land that had been sold. With funds from city coffers and private donations, in 2015, 10 years after Katrina, and under the guidance of a contractor, design workshop, and extensive planning process, the Lafitte Greenway opened.

I have to say I’m honored to be known as an urban bushwhacker.

As flattering as it is to be singled out, my natural humility and modesty requires me to add that I didn’t do it alone. My “friends” included a diverse and numerous coalition of people and frankly they did all the hard work. 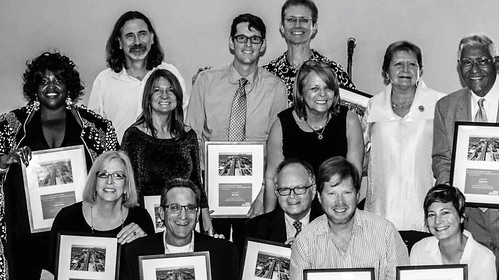 Truth be known, I’m more of a bushslacker than a bushwhacker.

But the CityLab article is worth a look, getting down into issues of gentrification that are on our minds today. So… read it. There’s been more and more coverage of the Greenway lately. See also this article by Claire Byun on Mid-City Messenger.