Yesterday evening some friends dragged me out to see Bernie Sanders at the Pontchartrain Center. 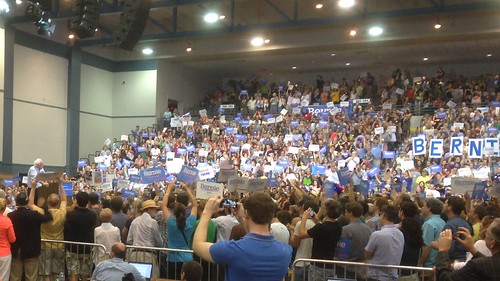 You may wonder, what’s a card-carrying Green Party member doing at a Democratic Party rally?

In my defense, I thought we were going to see Bernie Mac. As my friend pointed out, that would be somewhat miraculous, as he’s been dead for a few years. May he rest in peace. It turned out Bernie Sanders was pretty interesting too, though not quite as funny.

Bernie delivered a strong message on social justice, with particular emphasis on income inequality. He including a smattering of grassroots democracy and a single allusion to ecological wisdom. Our national propensity for dropping bombs and drones on other countries didn’t merit even a mention.

In other words, he harped on one issue, a crucially important issue, but he failed to make equally important connections. In the Green Party, we’d call him a “Single Pillar Green.”

Am I asking too much of Bernie? He can’t address every issue, after all. But as Bernie himself reminded the audience, we can do anything if only we set our minds to it. “Please don’t tell me that the United States of America, our great country, cannot guarantee health care to all people. Don’t tell me that every person in this country should not be able to get all the education that they need regardless of their income.” Yowza! By the same token, don’t tell me this carefully-crafted speech couldn’t include a more balanced message.

If the Democrats should choose Bernie, that would be amazing to me. I sincerely hope they do. It would be great to see income inequality as a central issue. Plus it’s fun to fantasize about “Feel the Bern” as a national campaign slogan.

However, it’s only a fantasy. The oldest and most powerful party in the world will never run Bernie for the most powerful office in the world. They will nominate Hillary. I predict it. At that point, Bernie will ask his supporters to vote for Hillary instead. Mark my words.

Of course, in the general election, 100% of my state’s votes will be going to the GOP, so it’s not like us folks here in Louisiana could ever cast a vote for either of them that would actually count for anything anyway.

Meanwhile, those of us who have been trying for years to build an alternative to the duopoly will continue trying to breathe despite Bernie’s rapacious consumption of oxygen.