Published by Editor B on Tuesday, 7 August 2012

A sick and hateful man killed six people at a Sikh temple in Wisconsin. My heart goes out to the families of those who have been killed. A community has been wounded, and in some way we are all hurt by such violence. As Maitri notes, we are all in the gutter.

But I didn’t think I’d have anything to say about it myself, until I saw this photo. 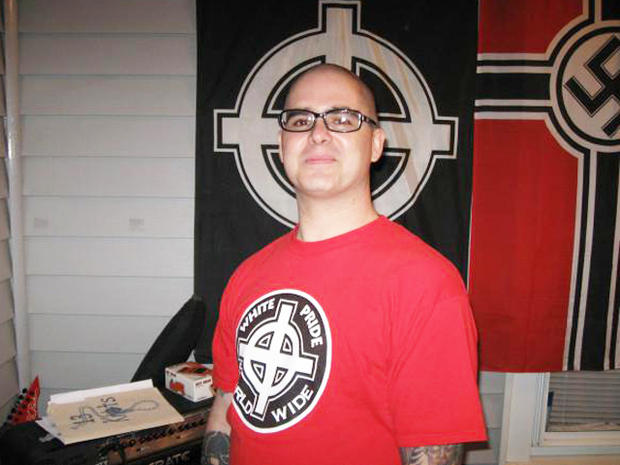 The symbol in the background, and on the man’s shirt, is a Celtic cross.

According to the Anti-Defamation League:

This is one of the most popular symbols for neo-Nazis and white supremacists. First popularized by the Ku Klux Klan, the symbol was later adopted by the National Front in England and other racists such as Don Black on his Web site, Stormfront, and the racist band Skrewdriver to represent international “white pride.” It is also known as Odin’s Cross. It is important to note that the Celtic Cross is used widely today in many mainstream and cultural contexts. No one should assume that a Celtic Cross, divorced from other trappings of extremism, automatically denotes use as a hate symbol.

The symbol is also called Woden’s cross, also known as a sun cross or wheel cross. It goes way back to the Bronze Age, so clearly it precedes any modern day neo-Nazi usage. Odin was, of course, a Norse god, the All-Father, the dude with one eye and two ravens who hung himself upside down from a tree and invented the runes. Yet, strangely, Odin’s cross is not on the ADL’s listing of “Pagan Symbols Co-opted by Extremists.”

Odin’s cool and all, but despite my Nordic heritage I am not a devotee. So why does all this concern me? It’s because the sun cross looks an awful lot like the Earth symbol. Usually the Earth symbol is seen without arms extending past the circle, but still the similarity is striking. Some even say they’re the same. The Online Encyclopedia of Western Signs and Ideograms suggests the Earth symbol evolved from the sun cross, and that it started as a symbol for the wheel.

I’m fond of the Earth symbol. The Earth is a sacred place, and if this symbol represents it, then it’s a good marker for my religious orientation. I’ve even seen it used as a generic blanket symbol for contemporary Paganism, which is often described as Earth-centered.

In fact, I’ve been intrigued enough by this symbol to have begun taking photos wherever I’ve found it over the past year, which I’ve compiled in a small set.

To me, this is not a symbol of hate. To me, it represents home, our home, the home for all humanity, all races and all religions — Sikhs, Jews, Muslims, Christians, atheists, Hindus, Zoroastrians, Pagans, Buddhists, indigenous shamanistic folk religions — everybody. It’s the only home humanity has ever known. We were all born here.

It’s disheartening, to say the least, to see this symbol associated with racial supremacists. Of course, it’s not the symbol that’s the problem, it’s the hatred and the violence.

That’s all I have to add. I like this symbol. I wouldn’t want anyone to think I’m a neo-Nazi.

I also shave my head from time to time, but that’s another story.