Yesterday afternoon I heard the sound of a brass band. I stuck my head outside and saw the Krewe of Palmyra coming down Alexander to make a stop at Banks Street Bar. 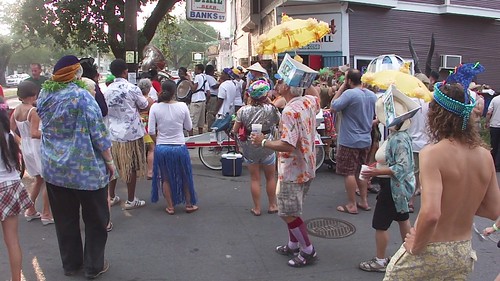 I thought I’d seen it all. I thought I knew what was going on in my neighborhood, at least, but I guess New Orleans still has a few surprises for me. This is the sixth year for Krewe of Palmyra but I never knew of them before. So there I was in my bathrobe taking some pictures and one of the second liners had the audacity — the effrontery — the unmitigated gall — to make fun of my scanty attire. Mind you, she wasn’t wearing hardly any clothes herself, so I hardly felt she should criticize me. Also, I want to go on record that I did pull on a pair of undies before leaving the house.

Apparently there’s some overlap between Palmyra and the Krewe of Space Age Love. According to their website, “In early June we participate In The Krewe of Palmyra no more parades in Mid-City and another reason to party protest parade.” I had to read that five times before it made sense. They were using the same float they used in the Krewe du Vieux parade. Someone was supposed to remove the penis to make it more “family friendly” but they never got around to it. Oh well.

Sometimes I really love this place.